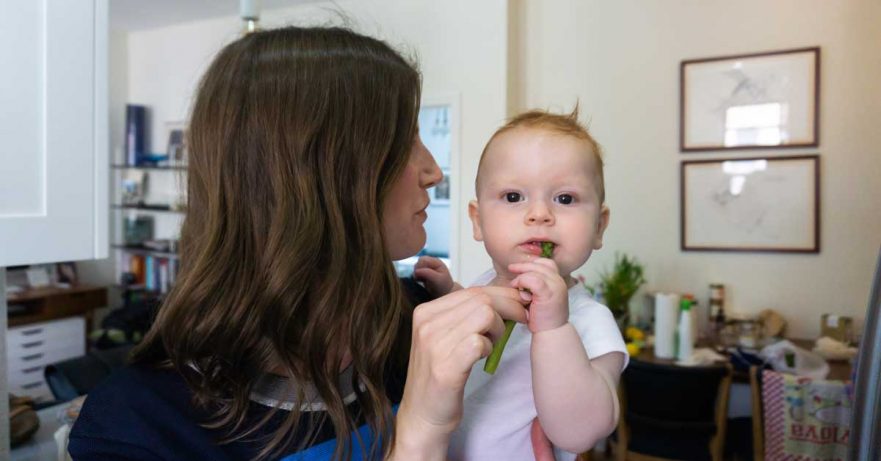 baby introduction to solids: nutrients to focus on
6-12 months


When it comes to introducing solid foods to your baby there’s really no right or wrong way to go about it. You may have an idea of how you’ll approach baby’s first bites, whether that’s spoon-feeding purees or baby-led feeding, but in the end it’s more about following your baby’s lead (verses your agenda, like most things in motherhood!), embracing the mess, and nurturing positive eating habits. There are, however, a few important things to keep in mind as you move through this milestone that can help promote your baby’s development and long-term nutritious eating behaviors.

The general consensus amongst pediatricians and experts is to introduce solid foods sometime around six months of age, or when your baby shows signs of readiness. These signs include: baby sits well without support and displays good head control, moves food around the mouth with his or her tongue (as opposed to immediately pushing it out), and shows consistent interest in eating – usually by closely watching you eat or reaching for your food. There is no rush to start, however, and like most things it’s less about the calendar and more about the baby.

Start with a food that feels the least stressful to prepare, like banana, steamed sweet potato or avocado, and keep it to a single ingredient as babies can get overwhelmed easily and it makes it easier to track any possible allergies. Know whatever foods you introduce for the first few weeks are complementary to breastmilk and formula, not a replacement. Milk is still the main source of nutrition for your baby.  While traditionally single-grain cereals have been given as first foods, there’s no medical evidence to suggest that rice cereal or oatmeal needs to be baby’s first bite. Additionally, no research supports the myth that babies will develop a lifelong preference for sweet flavors if you introduce fruit early on. Baby cereal, fruits and vegetables are low allergen foods and easily digestible, which is often why they’re suggested as first foods – though baby rice cereal does contain arsenic as has been recently highlighted in the media.

Iron is perhaps the most important nutrient for children 6-24 months of age. By 6 months a baby’s iron stores accumulated during pregnancy become depleted. This is about the same time their iron needs drastically increase to keep up with rapid brain growth and development – hence why baby cereals are always iron-fortified. While iron from breastmilk is easily absorbed and most formula is iron-fortified, it’s still important to include iron-rich foods in your baby’s diet early on, like beef, chicken and eggs, beans, tofu and dark greens.

Vitamin D plays a role in immune function and, together with phosphorus and calcium, is essential for building and maintaining strong bones. It’s also very difficult to get adequate amounts of Vitamin D through food. While formula usually includes Vitamin D, breastmilk does not contain enough of the nutrient to meet the needs of most babies, particularly during the winter months when mom and baby are not getting adequate sun exposure. Talk with your pediatrician, but supplementing with 400 IU of Vitamin D for partially and/or exclusively breastfed infants is recommended, at least until Vitamin D-fortified cow’s milk is introduced closer to one year of age.

Babies are rapidly growing during the first two years of life, and fat is an essential macronutrient for neurological development, brain function and the absorption of fat-soluble vitamins A, K, D and E. The type of fat, however, does matter. Focus on providing sources of high-quality fats from both animal and plant-based foods early on. This may include full-fat, unsweetened yogurt and cottage cheese, eggs including the yolk, higher-fat cuts of meat like poultry thighs and ground beef, as well as olive oil, avocado and nut butters. You want to limit a baby’s consumption of trans fat, which is found in fried and processed foods.

Herbs and spices have a number of health-boosting properties and infuse flavor into foods, exposing your baby to tastes and smells that will set them up to be more curious and adventurous eaters. A baby’s taste buds are impressionable early on, so there’s no reason not to spice up your baby’s food, increasing the likelihood of them seeking out flavor in the future. Aromatic spices and herbs like cinnamon, turmeric and cumin, rosemary and thyme are a great place to start. Garlic, ginger and onions can also infuse vegetables or proteins with mega flavor. A little goes a long way – always cook the spices with food, start with small amounts and build from there. The goal is for your baby to eventually eat the foods that your family eats, so getting them accustomed to the flavors you use in your cooking is important.

While any food can trigger an allergic response, the majority of food allergies are attributed to eight food groups: peanuts, tree nuts, milk, eggs, soy, shellfish, fish and wheat. New recommendations from the National Institute of Allergy and Infectious Disease advise early introduction of these eight foods to prevent food allergies. For babies deemed high risk, those with an egg allergy or severe eczema, introduce these foods between four and six months. Babies with mild eczema or no risk factors can be exposed around six months of age. Regular exposure to these foods is also recommended, so keep them on rotation in your baby’s diet. Unless advised otherwise by your pediatrician, the order in which you introduce the high allergen foods is up to you.

The Few Foods to Avoid

Including a variety of foods in your baby’s diet from the beginning fosters nutritious eating behaviors, however there are a few foods you want to avoid – most notably anything that can pose a risk of choking. Whole grapes, raw carrots and other hard vegetables, popcorn, nuts and thick portions of nut butters, and hard candies are all choking hazards and should not be introduced until well into the toddler years.

While salt is not completely off limits, use it with discretion. If your cooking food for just baby infuse flavor with other herbs and spices, while if you’re cooking food for the whole family a little salt won’t be harmful or predispose your baby to prefer salty foods. The type of salt actually does matter: table salt is fortified with iodine, an important mineral for baby’s brain and bone development. Opt for table salt in your family’s home cooking over fancy sea salts, which don’t contain iodine.

A few other foods to consider limiting include: juice in a sippy cup or bottle, high-mercury fish like swordfish and albacore tuna, sugar alcohols often found in processed sweets and candies, high fructose corn syrup and food dyes. The American Academy of Pediatrics also recommends holding off on honey until closer to one year. Honey can cause botulism in babies and their digestive systems are not yet mature enough to kill the spores.

Shira Sussi MS, RD, CDN is a Brooklyn-based registered dietitian, culinary enthusiast, nutrition expert, writer and mother. She teaches workshops around Brooklyn on pre-and-postnatal nutrition and introduction to solid foods, and sees clients in through telecounseling and in the comfort of their home. Get in touch at shirasussi.com.

Get fast, friendly, one-on-one breastfeeding support services from a qualified lactation specialist. Let us connect you to vetted, certified, expert lactation support that you can trust.

This in-depth class helps new families be ready to start their breastfeeding/chestfeeding journey with confidence in the early days and weeks after birth. It will cover how to get lactation off to the best start, latch & positioning, how to avoid common problems and when to call a lactation consultant. Class Details >